skip to main | skip to sidebar

Listen to the whining and then you can see the skating foot.....

It must still be Christmas because I’m still eating anything that doesn’t move. On the other hand, Christmas must be over because we finally put away the Christmas decorations last Friday…..Friday, January 14th. I’m starting off the new year a little late, it would seem.

I hope everyone had a fabulous Christmas, being with family, eating the holiday cheese ball, and stepping on the Chex mix. Yep, stepping on it. I always manage to drop a square or two of cereal when I’m making the mix, and I swear that I crunch it under my shoes for 3 months. Where does it hide when everyone else is tromping through the kitchen? It’s only out on the floor when I’m walking on it. I’m starting to get paranoid about it. It’s a conspiracy, I’m sure.

Anyway, I haven’t been blogging because I was working a lot, being poked/prodded/tested a lot, and trying to get ready for the holidays. So what shall we catch up on first? The poking, prodding, and testing? Okay, let ‘er rip!

Since we were last here, I have seen Dr. OhMyAchyBody. We are now up to 44 tubes of blood. The SED rate is still up there among the clouds. And this time we drained some blood for a Celiac Sprue Panel, testing to see whether I have celiac disease. I also had 2 MRI’s, one without contrast dye and then one with contrast dye. I am just claustrophobic enough to be bothered by lying in an MRI machine like a dead body stuffed into a way-too-small coffin. Not only was it very confining (my nose almost touched the ceiling of it), they had my head in this vise thing and strapped every way but loose. I was not amused. The MRI’s were to get the goods on my parotid glands—to see if there was inflammation or a tumor or whatever. Now, I had the blood drawn at Dr. OhMyAchyBody’s office. I said to the nurse, “I’m a little concerned about this particular round of tests. Please have someone call me with the results.” A week or so later, one of the nurses at the office called me about something else, and I asked her, “Please have someone call me about these test results.” At which time she informs me, “We don’t call with results if they don’t show anything.” I told her that I knew that, but these tests were very different from what I had been having and I wanted to be notified about the results. The MRI was on December 14th and I had the blood labs done on December 10th. Have I heard from anyone? NO! OF COURSE NOT! Not that I’m bitter or anything. :-) But how do I know that my test results haven’t just fallen through the cracks or something? So tomorrow, I’m calling them again and using my charm to get the stinkin’ results. I’m fairly certain that I don’t have celiac disease or tumors in my spit glands, but doggonit, I want to know FOR SURE.

So I see my ophthalmologist later this month. Then it’s back to the dentist, Dr. Dracula, and Dr. OhMyAchyBody next month. I also saw a dermatologist earlier this month (Dr. SheKeepsMePretty) and got a good report from her.

I was transferring information from my 2010 planner to my 2011 planner, and I now have 12 doctors—TWELVE—that I see on a regular basis. Isn’t that just a little excessive? Wouldn’t you think that one of them could figure out what’s going wrong with my body? God love ‘em, I shouldn’t say that because they’re all very good and trying very hard. I’m just getting a little tired of all this.

No more whining! Let’s talk about something fun! You all need to see our little Christmas tree. I don’t much like decorating a Christmas tree and I like un-decorating one even less. Also, by the time I do Dad’s tree and decorations, I just don’t want to do another one. But I help put up a small one at home and I always end up being glad when I do. This year, there was something a little different under our tree. Check it out.

Do you see something that doesn't belong there? 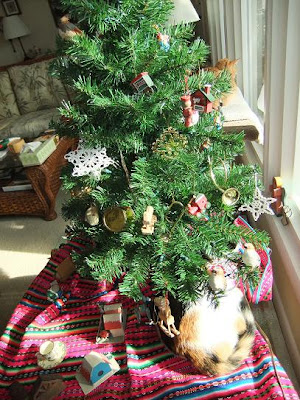 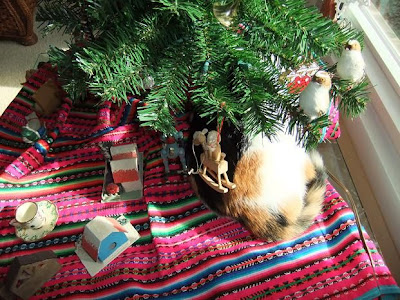 Yeah, nothing says "It's Christmas!" like a cat butt under the tree!  "Butt" to be fair, I should probably let you see the other, more pleasing end of Louise the Wonder Kitty. 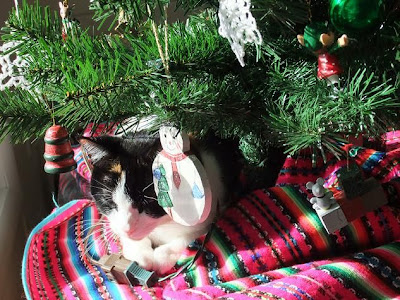 ﻿
She's a pretty girl.  Of course, now her sister Thelma wants her picture here, too.﻿ 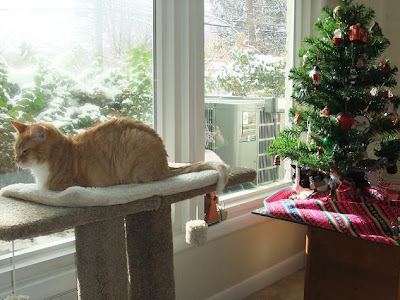 Now that I've bored you with pictures, I'm going to bore you with more pictures.  But these are worth it.  Every year at my Dad's house (and formerly Mom's house, too, rest her soul), we set out the skating rink by the Christmas tree. 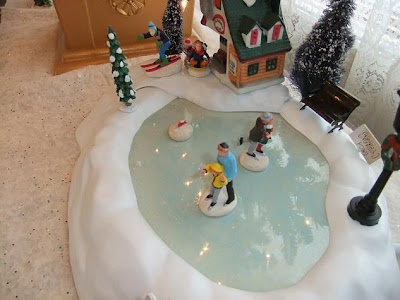 It's just a cheap thing that I picked up many years ago to amuse the younger sisters and brothers.  Now THEIR kids love playing with it every Christmas. The skaters "skate" because there are magnets on the bottom of their bases that follow a set path that is inserted beneath the pond.  I know what you're thinking.  "Hmmm, I see two sets of skaters, but what's that lump?"  That, my friends, is the skating foot! 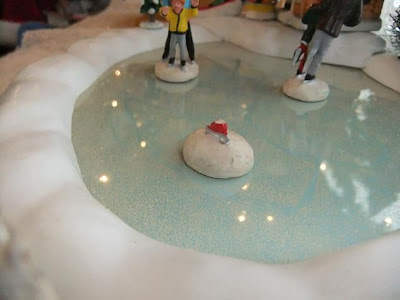 Sometime, somehow, the beautiful figure skater doing the figure-8's was separated from her foot, unable to be fixed, buried in the trash can.  And now the foot skates all alone, searching and longing for the body it once had.

Debby
Okay, so I don't know everything, but I'm darn near close. Come on in, grab a seat, have some chocolate, and hang out for a while. You never know what you might find here. By the way, if you use any of my content without asking first, I will hunt you down and use you for cat food. :-)